I am Professor of Gender & Women's Studies and Director of the online graduate programs in Human Rights Practice at the University of Arizona.  My research is highly interdisciplinary applying theoretical, legal, qualitative, and quantitative approaches to social justice and human rights issues.  simmons_cv_february_2021.pdf

**Recent Updates**
January 2020: I traveled with Robin Al-haddad to Bangladesh to do a pilot test of participatory art techniques with Rohingya children in the refugee camps. .

2019:  In March 2019, my book Joyful Human Rights came out from Penn in their prestigious Human Rights series.  Also, I published an article in the Journal of Human Rights and made 10 invited talks – including the Waters lecture at Presbyterian College, three talks at universities in Italy, and 2 in Russia.  I also was an invited participant at human rights workshops at Columbia University and Occidental College

May 2018:   My co-authored chapter "Critical Ethnography and Human Rights Research" with Lindsey Feldman was just published in the Routledge volume Research Methods in Human Rights, edited by Lee McConnell and Rhona Smith.

March 2018:   My co-authored article on the Secure Communities program is forthcoming in DuBois Review:  what wonderful co-authors!  The title is “Immigration Enforcement, the Racialization of Legal Status, and Perceptions of the Police: Latinos in Chicago, Los Angeles, Houston, and Phoenix in Comparative Perspective” with Cecilia Menjívar, Daniel Alvord, and Elizabeth Salerno Valdez.  Note - it has already been cited in an Amicus brief for the Ninth Circuit case on "Sanctuary Cities".

December 2017:  My new book Joyful Human RIghts is due out in 2018 from the University of Pennsylvania Press!

November 2017:  Just returned from a research trip to Niger and Nigeria working on human rights with people affected by leprosy.

​November 2015:  Had a wonderful time in Hohhot, Inner Mongolia as a resource person for workshops on developing gender rights curriculum in Chinese universities.  Organized by the Raoul Wallenberg Institute for Human Rights and Humanitarian Law and the Inner Mongolian University Law School.

September 2015:  Pleased to announce that I received the 2015 Mary Bernard Aguirre Professorship from the fabulous folks at the UA Women's Studies Advisory Committee and the SBS Outstanding Teaching Award for Excellence in Lower Division Teaching. Thanks to everyone who nominated me, wrote letters, and supported me in so many ways!

September 2015: So pleased to announce my co-authored article (with Leonard Hammer) on private prisons in Israel, Arizona, and beyond is now available from the Santa Clara Journal of International Law. We use a groundbreaking decision from the Israeli Supreme Court to show how private prisons are a violation of the fundamental right to human dignity irregardless of the actual conditions in the prison.

March 2015:  Our (with Cecilia Menjívar and Michelle Téllez) article "Violence and Vulnerability of Female Migrants in Drop Houses in Arizona: The Predictable Outcome of a Chain Reaction of Violence" is now available online in the journal Violence against Women.

January 2015:  So pleased and honored to be elected to serve on the Board of Directors for the Lost Boys Center for Leadership Development!

July 2014: Very pleased to announce that my 2011 book Human Rights Law and the Marginalized Other is now available from Cambridge in paperback. You can read my extended analyses of the Little Rock 9, the headscarf affairs in Turkey and France, the Sardar Sarovar dam controversy from India, indigenous rights in Canada and in the Inter-American Court, self-ascription in U.S. asylum law, and several other issues: http://www.cambridge.org/US/academic/subjects/philosophy/legal-philosophy/human-rights-law-and-marginalized-other

September 2013: My edited book with Carol Mueller entitled Localizing Human Rights: The U.S.-Mexico Experience is due out in a few months from the University of Pennsylvania Press.  The book includes chapters by leading activists and scholars from the U.S. and Mexico.

January 2013: I have moved to the University of Arizona where I am an Associate Professor of Gender and Women's Studies and an Honors Interdisciplinary Faculty member in the Honors College. 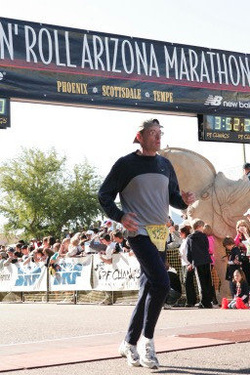 The finish of my first marathon